ago, leaving behind faintest impressions, only visible at certain times of day, in certain angles of light–early morning is best–and it’s first moment of journey that feels real, to see something that hasn’t been trussed up for tourists. So far, it’s been part pilgrimage, part joy ride with at least one minor detour into Heart of Darkness. Morning elephant ride down track into muddy waters of Kwai was ridiculous–are you kidding?–clinging to black hairs on enormous head, almost slipping into river while someone on movie crew–Matthew?–shoots video as if we’re characters in TV reality show. Father sits in plastic chair on far bank, watching, waving.

There were more than forty camps between here and Thanbyuzayat. Now there’s almost nothing except the ghost tracks swerving away from river, cutting through chalky hills, back to the river again before vanishing among weeds. This is what remains of 150,000 dead and their dubious achievement: 415 kilometers of track through impossible terrain. 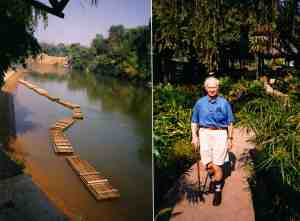 Driver takes us further north, up Rt. 323, to outskirts of village that used to be Rintin, near 200-km marker, south of Khao Laem Resevoir. Father totters down path descending through high-feathered Lalang, only inches at a time, me clutching his hand, looking for more artifacts through dusty light, curious about wild orchids. Poor Dutch buggers, Spring 1943–or earlier?–on our way back from Burma, he says, but all seems peaceful now as if nothing ever happened, just lianas dangling and strangler figs, pitcher plants, blooming Raffelesia, and my Father’s shirt soaked with sweat. Cholera, he says and gulps more water which only makes him have to pee again. Japanese built a small, makeshift hospital nearby but they closed it down, burned the bodies, abandoned the camp and threw everything into the river. No birds to be heard, no cicadas in underbrush.   Rintin turns out to be the place of eerie stillness, the quiet, haunted place.

Stumble across diary entry of Scottish M.O. named Hardie, written at Takanun, not far from here, mentions Father by name: September 13, 1943: The rail-laying party reached this camp six days ago and has passed on upwards. The track is now being strengthened and titivated. Captain Gordon of the Argylls, who walked down here the other day from a camp 10-12 kilometers higher, passed three skeletons and two decaying Tamil corpses on the way. Scan through rest of diary but can’t find another mention of Captain Gordon, just the single, fleeting glimpse, stunned by such an appearance and wondering why Father was walking down the line like that, a character in someone else’s narrative. Who were the decaying corpses? Who were the skeletons? (Learn later that Hardie was gathering facts about atrocities, keeping secret count for International Red Cross and eventual War Crimes Tribunal.) Had to look up “titivate” which means to make neat, smart, or trim, and afterwards dream of Father walking through

Valley of Death, limp bodies draped in aztec mounds, and all I want to do is get the fuck out, wake up in strange room, 4:30 AM, perforated blocks, green paint. Where am I? Sit up in bed, switch on light and read from little book of proverbs provided by Buddhism Promotion Centre of Thailand. Pull yourself up from the slough (of passions) as an elephant pulls itself up from the bog, uncanny and apt considering I’d been riding elephant same day, mired in slough of my own making. Next morning, at breakfast on terrace, I write note to self: Resist Nothing.

We’d arrived a few days earlier at Bangkok International teeming with pungent humanity, no air conditioning, flight from Tokyo four hours delayed, endless lines at immigration but kindly Thai official greeted us and pushed Father’s wheelchair through labyrinth of back rooms, all the way to minivan waiting at curb. Shroud of smog hovered over city, jammed with rush-hour traffic on 50th anniversary of King Adulyadej’s reign, main avenues

blocked for procession with elaborate krathongs and Bai-sri flower arrangements hanging from trees and street lamps. Billboard on one corner had giant likeness of King’s face, geeky, pouting, wire-rimmed specs, crawled down Watthama Road to elevated expressway, between unfinished high-rises hanging precariously over edge. Father nods asleep as we pass Buddhist temple with fluorescent lights hanging at crazy angles and dragon with scales the size of flip-flops. English-language radio station (Wave FM 88) blares report of rebel insurgents crossing border from Myanmar, taking hostages in Ratchaburi, not that far away, driver shrugs and says situation under control, not to worry. Stopped at checkpoint by Army officer with ugly, pockmarked face, sack of green onions dumped onto pavement, brand-new stereo pulled from box with Styrofoam puffballs. Surge of paranoia but we’re soon waved north, past rice paddies and

old Htoo Twins with magic powers to change shape, dematerialize, make bullets pass through flesh without harm. First sight of Kwai on left, simmering with copper streaks and flecked patterns on surface, twisting and turning through low-lying farmland,  past Lat Bua Khao and Phong Tuk, following same route that Father took on 65-mile, barefoot trek in 1942. Sun slings low in sky as highway skirts edge of river near Tha Maka where I can see barges filled with teak pulling against current.

Feb. 5, Amphoe Muang: Dragons are energetic, short-tempered, stubborn but also brave, honest, sensitive, eccentric, and “soft-hearted” according to cheap little Chinese calendar I buy at souvenir stand near Bridge. I am Dragon, so is Father, and we are both compatible with Rats, Snakes, Monkeys, and Roosters. Mai khaen grows in clusters along slippery embankment at Wampo. Ironwood? This is where Father lay for several weeks, he’s sure of it, near edge of river, sandy embankment, sick and gazing in delirium at distant hills, volcanic shapes like Ming Dynasty landscape etched into subconscious released again, somehow, sixty years after fact. I approximate place where he lay on crude map–something that a child might have drawn for a treasure hunt–that shows rail line branching off to encampment with sleeping huts, cookhouse, medical hut. (POW’s were allowed to swim in river here until cholera outbreak.) 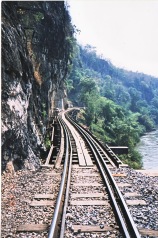 Rebuilt section of line operates for tourists now and we cross a viaduct made from rough-hewn logs, semi-vertical baulks lifted into place by the scarecrow men. Father looks pale and wobbly himself so I ask him to sit on bench in shade of cave in side of hill. Buddhist shrine in back, strewn with flowers and incense–another world altogether–and from there, overlooking river, he makes a sudden and unwanted connection to past: Five fellow officers were executed on the spot, near cave, and he was forced to watch, thinking how it might have been him if he hadn’t been weak from fever and unable to join escape party. God, how benumbed and broken I feel in shadow of his War, like the child to his looming presence and survival stories at dinner, in Princeton, around big mahogany table with silver bowls, nauseated by so many scenes of torture and

hanging, burning bodies, can you pass cranberry sauce? Old friend of mine says all periods of history press down on us at same time, including present and future–How strange it is, to be standing leaning against the current of time (W.G. Sebald)–and I can see how time is pressing against Father’s chest and shoulders, almost crushing him into the floor of the cave, forcing him to relive that day in 1943. 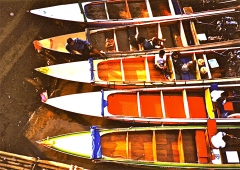 I turn down Songkwae Road skirting river to point where all three branches converge: Meklong, Kwae Noi and Kwae Yai. Run into mob of workers from some suicide factory in Southern Fujian who’ve been bussed in for cheap holiday but don’t understand what to do with off-time except mill back and forth across Bridge in packs, barking in Hokkien dialect, pushing everyone out of the way, eager to enhance their single day of leisure. Woman carrying newborn baby and birdcage has no problem negotiating precarious passage, tiptoeing over open  ties while still taking photos, spitting, bouncing baby, and never being crushed by train that crosses every five minutes. Has she even seen David Lean’s movie or read Father’s book? (Doubtful.) I attempt

to walk in opposite direction, against primary flow–from Kanchanaburi to Tamarkan, instead of other way around–but get stampeded, almost shoved into river, before turning back. Entry scrawled in notebook that afternoon: Never, ever, try to cross Bridge on River Kwai, Chinese New Year, Year of Dragon!  Allied flags hang limp over gateway to JEATH War Museum next to Wat Chaichumphon, like miniature version of Bridge, and while called “museum,” it seems more like freak show. (“JEATH” stands for Japan, England, America, Thailand, Holland with Japan getting first billing.) I walk past fake guard tower into long bamboo hut with attap roof and sleeping platforms, very hot inside, fan blowing against photographs stacked haphazardly along walls with scenes of pyres, starved men lifting logs, captions misspelled. Display cases hold war memorabilia, spent shells, rifles, bayonets and something called “True Map of Death Railway.” A blue-and-red steam engine in yard once pulled freight along same Death Railway and there’s also a boxcar with naked POW behind iron bars like monkey in zoo. (Revenge of formerly oppressed?) Another gallery has life-sized figures of POWS in plaster, crumbling and

painted over with murky flesh tones. Group of tall Norwegian tourists file out of bus, look at torture scenes, shake heads, get back on bus and go to Sai Yok or some other package deal: river rafting, eco tour, elephant ride, waterfall. River Kwai is just another pop destination, cheaper than Phuket, and why not? Auschwitz has its own kind of atrocity tours. Once a year there’s Disney-style son et lumiére at Bridge with smoke and laser beams, strobe lights, pyrotechnic explosions and sound effects to recreate Allied bombing of 1945.

Father was never clear about where he’d come from, what made him who he was. He’d patched all of that together after the war with the help of my mother. The first chapter of his own book was called “Death House” and it referred to a bamboo hut at Chungkai where he was taken to die along with others who were beyond hope. The yellow glow of the makeshift lamp gave enough light for me to see my comrades of the night, he wrote. They were ten dead men dressed in their shrouds of straw rice sacks. It was hard to tell they were corpses. They might have been bags of old rags or old bones. He survived against odds with help of friends, faith and an amazingly stubborn will to live, but a part of him never left the place with the corpses and rice sacks. It took him several years to understand what his new life, his calling, was meant to be, but it began here, on the banks of the Kwai, at least that’s how he used to tell it, and sometimes I think of him suspended in this nether world, deep in the river valley, amidst vague outlines and purplish light, a ghost among other ghosts. Faces come forward and then recede. Tell them not to worry, he says. My end is not as bad as they fear.

This is the second in a series of “discoveries” about my father’s life.
See also:
#1 Reconstructing my Father’s Plane Crash, 1936