Karl Ove Knausgraard, chain-smoking, angst-ridden Norwegian author, recently announced that “the physical world is gone”, and he has a point. So much has been lost to Google and flat-screened placelessness that we can hardly estimate the damage to our personal geographies. Knausgraard himself fought oblivion by writing a 3,600-page novel that recreated his own physical world in Proustian, sometimes crushing detail.

Mark Dion, artist, has conjured up his own incantations for the physical through a lifetime of rummaging, collecting, cataloguing, exploring, traveling, and digging through dead people’s attics and archives. He assembles, arranges and exploits that same materiality to reach a kind of equilibrium in which of all periods of history (including the future) converge and press down on a self-conscious present. 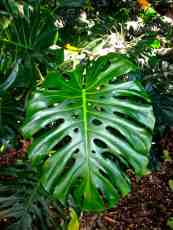 “Gardens are philosophy made concrete,” said Dion, who was recently invited to create an installation at the Kampong, a botanical garden in Coconut Grove, Florida, that was the former home to botanist and plant explorer David Fairchild. Fairchild is an heroic American figure, co-creator of the Everglades National Park and founder of the Seed and Plant Introduction Section for the U.S. Department of Agriculture. As such, he was responsible for bringing more than 58,000 species into the country. He also helped to define the city of Miami as much as any developer, architect or urban planner ever did, and it’s impossible to understand the genie of the place without understanding Fairchild’s vision, a vision that is fully manifest in the gardens and workshops of the Kampong.

In his books–Exploring for Plants (1930); The World was My Garden (1938); the World Grows Around my Door (1947); etc.–Fairchild comes across as a Zelig-type visionary and latter-day Johnny Apple Seed, who goes everywhere, meets everyone, travels the globe to gather rare specimens with Barbour Lathrop, a wealthy bachelor, imports mango trees from Trinidad, tung seeds from China, alfalfa from Peru, shaddock seeds from Iran, raisin grapes from Italy, sausage tree seeds from Egypt.
In 1905, he marries Marian, daughter of Alexander Graham Bell. They hang out with Thomas Edison and the Wright brothers as they take their first manned flights in North Carolina. In 1916, he buys the Kampong and converts the seven-acre property into a family home and experimental laboratory, and plants many of the species that he gathered during his travels. His seven-acre garden flourishes and expands to nine acres as Fairchild claims this part of south Florida as the only true jungle in North America.

His refuge through all of this was an old building made from oolitic limestone that lies on the south side of the property. In 1923, he converted it into an office and laboratory and surrounded himself with plant samples, books, maps, horticultural charts, and this was where he documented, cross-fertilized, photographed, and wrote about his subject with increasing passion. Dion’s brief was to reconstruct the interior of the lab in a way that Fairchild might have left it if he’d walked out one day and never returned. The work is part historical reconstruction, part 18th-century Kunstkammer, part poetic exegesis. Working with scanty evidence, a small collection of original documents, and one or two grainy photographs, the artist assembled a roomful of artifacts, arranging books and objects on shelves and table tops with old botanical prints, maps and typewritten notes pinned to a cork board, specimen jars, tweezers, pencils, plant presses and drying racks, seed pods lying in enameled trays, rubber stamps, drafting and measuring tools, an encyclopedic litany of material culture culled from the first half of the 20th Century. 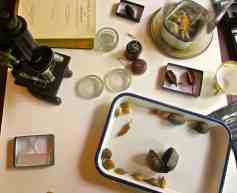 At times, one feels suspended between artifice and authenticity, but that seems to be the realm that Dion chooses to inhabit, the ultimate bespectacled amateur–archeologist, entomologist, ornithologist, paleontologist–armed with pith helmet, butterfly net and fine-arts degree, surfing a thin line between museology, botany and installation art. It’s a liminal realm he’s explored in both his personal life and art, whether in collaboration with other artists and scientists, in museum installations, or in his founding vision for Mildred’s Lane, the hundred-acre farm in rural Pennsylvania that continues to serve as experimental Petri dish for artists, dreamers and students, a place where the accidental and natural often converge.

While many of the prevailing assumptions about the natural world have, since Fairchild’s time, been dismissed as leading to environmental catastrophe, Dion’s Kampong installation is not a platform for critical analysis or condemnation. There are allegories and clues throughout, and intricately composed vignettes that might be read as fragmentary narratives within an art historical context, however arbitrary they might be in the positioning and overlapping of textures, colors, volumes. Rusting awls, hammers, snips and knives are hung from a custom-made tool rack, fetishized like a Beuys installation, as is a cluster of mason jars filled with organic specimens suspended in clear liquid. A still-life grouping of stoneware jugs summons forth Morandi, while below that, a collection of wooden boxes has been stacked and clustered like a Cubist relief with a red Savarin Coffee can as the only moment of pure color and reminder of Johns’ “Painted Bronze” (1960) that also featured a red Savarin can. This may be reading too recklessly, but the point is made that Dion’s practice is as much a selective exercise as any form of studio art.

The internal artifice leads inevitably out to the riotous tangle of the Kampong’s grounds–Fairchild’s true laboratory–nine acres under the “big-finned palm, the green vine angering for life”, the Royal and Talipot, Sagisi and Pejibaye, the bright orange fruit of the Arikury palm (from Brazil); jackfruit, heliconias, mango trees and cycads laced and interwoven with bell-shaped figs creeping up the walls of the main house, ant trees, rubber trees, succulents with frazzled white threads, Soursop, the flamboyante from Madagascar, a swelling baobab from Tanzania, the Ashok or so-called “sorrowless tree” from Southeast Asia, and carpets of tiny flowers leading down to the saltwater inlet now filling in with thickets of mangrove and stalked by a somnambulant iguana.

A giant banyan (Ficus benghalensis) hangs over the main entry with veils of shaggy air roots, threads, shoots, buds, and all of these plants and vibrant colors, these “green sides and gold sides of green sides” can be seen within the context of Fairchild’s greater legacy: a museum of living matter, indexed and catalogued despite the apparent wildness.
While Dion never lays hands on the exterior landscape, his reclamation and reconstruction of Fairchild’s second-floor laboratory serves as a kind of lens through which to view, re-frame and re-experience the living thing itself, the garden of forking paths and “slovenly wilderness” while shedding light on the very culture of exploration and selection that Fairchild helped to invent.

Quotations in italics are borrowed from Wallace Stevens’ “Nomad Exquisite”, 1923.

All photographs by Alastair Gordon.